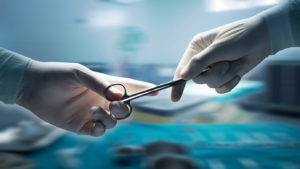 The New Jersey medical malpractice attorneys at Fronzuto Law Group recently filed a lawsuit on behalf of a victim’s family after the man suffered multiple injuries during surgery, which resulted in his wrongful death.

The victim initially entered St. Joseph’s Regional Medical Center in Paterson, New Jersey for an adrenalectomy. An adrenalectomy is a surgical procedure intended to remove one or both adrenal glands, which are positioned above the kidneys. The adrenal glands are responsible for producing a variety of hormones necessary for regulating certain bodily functions, including metabolism, blood sugar, blood pressure, and immune system.

During the surgery, the anesthesiologist noticed blood coming from the victim’s nasogastric tube. After vascular and bowel injuries were noted, the Trauma and Vascular Teams were called for an emergent intervention. The interventional teams had to perform numerous repairs, including injuries to the right iliac artery and the duodenum, as well as a temporary abdominal closure. Additionally, there was a tear of a vein requiring sutures and a laceration to the spleen that required cauterization.

Following the repairs, the victim was taken to the Intensive Care Unit (ICU) in critical condition. Later that day, he was rushed to emergency surgery for a splenorrhaphy after suffering a postoperative hemorrhage. A splenorrhaphy is a procedure to repair the spleen after a traumatic splenic injury.

Just days later, the victim was forced to undergo yet another surgery to reopen and explore his abdomen. During this procedure, doctors confirmed injuries to the spleen, iliac artery, inferior vena cava, duodenum, and pancreas. The pancreatic trauma resulted in pancreatitis and a drain was placed for the pancreatic fluids.

Within days, the victim developed tachycardia, fever, bilious output from the drain and sepsis due to another perforation of the duodenum, in addition to the inability to close the first perforation. He underwent yet another surgery at this time, as doctors attempted to repair the catastrophic damage to his body.

Less than a month later, a catheter and a drain became dislodged during physical therapy. When the doctor who performed the initial surgery attempted to replace the catheter, he punctured the inferior vena cava (IVC). The IVC is the largest vein in the human body and is responsible for carrying deoxygenated blood to the heart.

As of this time, the victim had suffered a host of catastrophic injuries, including septic shock, multiple IVC and duodenal perforations, anemia due to blood loss, and a hostile frozen abdomen. During his final surgery, his conditioned further deteriorated and his heart rate dropped. Shortly thereafter, he was pronounced dead.

This case is a tragic example of what can go wrong when doctors err during surgery, causing serious injuries. The results of surgical errors can range from organ perforation to tissue damage, ruptured veins, and even death. In some cases, surgical trauma is recognized immediately. In others, a patient will experience serious complications only to find out later they were injured during a surgical procedure. Regardless of the circumstances, victims who suffer harm as a result of medical negligence during surgery have the right to pursue compensation.

When seeking damages for medical negligence, you and your family need an experienced advocate fighting for your cause. At Fronzuto Law Group, our skilled medical malpractice lawyers represent victims in Passaic County, Essex County, Bergen County, and throughout New Jersey. Our firm’s approach is entirely individualized, as we concentrate our efforts on the unique circumstances of each client. When you enlist our firm, we support you with every aspect of your case and fight for the maximum compensation. Need a free case evaluation? Let us help. Simply call the attorneys at Fronzuto Law Group today at (973)-435-4551 for a no-cost consultation about your medical malpractice case.