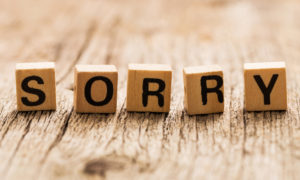 The Effect of “Apology Laws” on Medical Malpractice Claims

In recent years, states have adopted “Apology Laws,” which allow doctors to apologize to patients for medical errors and negative outcomes without fear of such apologies being used against them as evidence in medical malpractice litigation. While 38 states and the District of Columbia have embraced the idea of doctors saying sorry, and enacted legislation this effect, there has been little known about the ultimate impact of apology laws in these states. In this article, we take a deep dive into apology laws, the intention behind them, and what we do know about their impact. As a patient receiving medical care in New Jersey, it is important to understand how apology laws – or the lack thereof – may apply to your case if you have been a victim of medical malpractice. If you are wondering if you may have a potential claim against a doctor or other healthcare provider, contact the New Jersey Medical Malpractice Litigation Team at Fronzuto Law Group to discuss your specific case. You can reach us anytime at (973)-435-4551 or contact us online to arrange a free consultation.

What are Apology Laws?

Apology Laws are specific pieces of legislation providing doctors and other healthcare providers with the opportunity to apologize for adverse medical outcomes, and preventing patients who suffer these outcomes from using such statements as evidence in a medical malpractice lawsuit. The intention behind these laws is to reduce the likelihood that a patient (or loved one of a patient) who suffered harm due to negligent medical care, will pursue litigation. Apology laws are also founded on the assumption that they may make plaintiffs more open to settling claims against nurses, medical technicians, and doctors across specialties.

When a physician says “sorry,” after misdiagnosis, surgical error, lack of postoperative care, birth injury, or another form of inadequate treatment, one might assume that first and foremost, they are. Beyond the signal of compassion or empathy, an apology may be interpreted as an admission of guilt. In other words, if I apologize, does that mean I know I did something wrong? One might assume so. The idea behind states adopting apology legislation is to negate this worry for doctors and healthcare providers, who can say sorry without their words, expressions, writings, or other disclosures being used against them to prove malpractice.

There is little evidence to support the efficacy of apology laws in decreasing the medical malpractice litigation rate. In fact, a recent study further investigated this concept, examining a significant sample size of claims from a large malpractice insurer. The results, published in Stanford Law Review, were quite revealing.

Researchers at Vanderbilt University analyzed medical malpractice claims against 90 percent of doctors in the U.S. by particular specialty, including surgeons and nonsurgeons. These cases were drawn from an 8-year period between 2004 and 2011. They ultimately discovered that apology laws did not have a positive impact on the number of claims against surgeons in states where these laws apply, with approximately two-thirds proceeding to litigation in court. On the other hand, events involving non-surgeons were 46 percent more likely to end up with a lawsuit in states with existing apology laws.

In order words, they found that doctors specializing in nonsurgical fields were actually at increased risk of being sued in states with apology laws. They also found that the average dollar amount for settlements was higher in these cases. Surgeons did not experience a similar phenomenon. Investigators posit that the obvious nature of surgical errors gives rise to the difference between claim rate against surgeons versus nonsurgeons in apology law states. They also suggest that perhaps the fundamental risk associated with surgery contributes to the discrepancy among specialities. Overall, the data suggests that apology laws make it more likely for doctors to face lawsuits for medical malpractice. This is just the opposite of their intended purpose.

Doctor Apologized for the Outcome in NJ, What are my Rights?

New Jersey has yet to adopt specific legislation to protect medical professionals from their apologies for potential mistakes. At the end of the day, is an apology really enough? What if a doctor fails to detect cancer for a prolonged period and your condition worsens? Will an apology pay for the astronomical costs of medical care? The time missed from work? The stress and strain on you and your loved ones? Will “I’m sorry” give you back the time you lost while ill or suffering from injuries or complications? It appears for patients in New Jersey and across the United States, sorry simply doesn’t suffice.