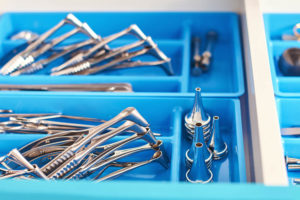 The sinuses are important aeration, drainage and lubrication channels that keep the skull light and the nasal passages protected from invaders like dust and pollen. The fine hair, called cilia, that lines the sinuses serves as a conduit of mucus drainage from the sinuses to the nose. Since the sinuses must remain clear for optimal breathing, when they become blocked due to growths, infections, or structural abnormalities, surgery is sometimes required to clear them.

The reasons that individuals may undergo sinus surgery are vast and varied. First, if a person is born with bone deformities that block the sinuses or had a trauma to the face that left bones protruding into the sinuses, surgery might be necessary to remove obstructions to the sinuses. Similarly, when tumors, polyps or other growths in the nose appear, they must be surgically removed or risk sinus blockages and infections, which can cause swelling, another source of problems when they block the free passing of mucus from the sinuses to the nose. Another obstruction, nasal polyps, are small swellings in the nasal passages. They form when the lining of the nose becomes irritated and swollen and can cause breathing issues, face pain, runny nose, recurring infections, nasal congestion, and loss of smell.

Sinus infections or sinusitis may require surgery also. Common symptoms of sinusitis are similar to cold symptoms, such as a runny nose; congestion; headache, cough; pressure around the face, especially around the eyes, nose, and brow; hearing loss due to ear blockage; and mucus dripping down the throat. When infections recur frequently, surgery may be required to clear the passages and prevent future infections. Most doctors will try a course of antibiotics before resorting to surgical removal of nodules or other obstructions. They may also recommend nasal sprays and rinses, steroids, allergy medications, and antihistamines to combat recurring infections. If all fails, surgery may be the only solution.

Different Types of Sinus Surgeries may be Recommended

One type of surgery, known as endoscopic sinus surgery, is an outpatient procedure, which is performed through the nose. With functional endoscopic sinus surgery, a thin lit telescopic tube moves through the nose into the sinuses, where the doctor uses tools to remove any polyps, bone, or other obstructions. Another type of endoscopic surgery is performed with the endoscope plus infrared and CT scan technology to guide the surgeon into difficult sinus complications. The additional tools act to help the surgeon see clearly into deeper spaces in the sinus cavity. Another procedure is aimed at creating a clearer canal for drainage, by opening into the jaw and mouth to enter the sinuses and remove growths, as well as create a drainage channel.

While most sinus surgeries are completed without complications, all surgeries have inherent risks, such as infection and bleeding. Patients may experience bleeding within a day of the procedure or a blood clot to the septum, the bone that separates the left and right nostrils. The septum may also be damaged during surgery, as well as the eye, when the bone between the eye and the sinus cavities is damaged. Bleeding into the eye can cause vision loss or distortion, such as double vision, and frequent tearing from damaged tear ducts.

Additionally, when brain fluid spills into the surgical area, an infection may develop. Meningitis, which is a dangerous brain infection, must be diagnosed and treated urgently to prevent worsening complications. Other complications include loss of taste, smell, or voice. The voice may likewise be altered after surgery is performed. Although uncommon, it is possible for the nasal airway passages to become partially blocked when scar tissue forms. While some potential complications seldom occur, infection and damage to adjacent bones and tissues to the surgical site are more frequent causes of people suffering after sinus surgery. Surgical-site infections and other infections affecting surrounding organs or the brain can be deadly.

Post-surgery, most patients go home within a day or so with gauze packing in the nose, which eventually dissolves or is removed by a doctor. Recovery time is reasonably short, depending on the age and health of the individual. Pain medication is usually prescribed, as well as instructions on how to care for the surgical site to avoid infection. If an infection develops, antibiotics are typically prescribed to eradicate the infection as soon as possible. However, some patients discover complications of the surgery after leaving the hospital. Some even find that the surgery did not fix the problem they came into surgery for, including recurring infections or bone deformity obstructions. In some cases, the surgeons made mistakes and caused worse health problems than the cause for the surgery, whether it be blindness, meningitis, or another serious complication.

Specialists who perform sinus surgery are typically otolaryngologists, otherwise known as ear, nose, and throat doctors. These physicians specifically address diseases of these areas, so they are often the ones to diagnose and treat sinus problems, including recommending and performing surgery. Otolaryngologists are specialists in their field, meaning they take extra time to learn their specialty beyond medical school and intern in their specialty before practicing on their own. As such, they should know how to perform the various sinus surgeries without harming a patient who has entrusted them with ensuring a successful outcome.

Surgeons operating on the sinuses can make a host of mistakes which open them to potential medical malpractice litigation. For instance, the doctor performing the surgery may fracture one of the orbital bones, permanently depriving you of sight. Or perhaps your doctor accidentally cuts the lowest of the three bony structures on either side of the septum that function as air warmers and airflow controllers, during sinus surgery. Other errors include operating on the wrong sinus site, sometimes due in part to erroneous or misread radiological reports. Likewise, insufficient follow up with patients who develop infections or continue to experience adverse symptoms due to improper surgical techniques or errors, may cause devastating effects. In all of these scenarios, sinus surgery doctors, hospitals, and their staff may be responsible for debilitating health damage.

Sinus surgeries are one of the more common surgeries, and yet individuals often suffer harm when doctors make mistakes that should have been avoided with proper attention, training, and medical practices. When you have suffered injury at the hands of a doctor performing sinus surgery, you may be forced to have another surgery or surgeries to repair the damage. You may even need long-term or lifetime treatment to live with the damage done, such lost vision. You should not have to pay for injuries inflicted by a medical professional’s negligent performance of sinus surgery, and you may not have to.

Seek the help of a New Jersey sinus surgery malpractice attorney on our team to explore your avenues of redress, such as monetary compensation for all the medical costs and lost wages incurred due to doctor visits, as well as for the pain and suffering you experienced due to unnecessary injury and long-lasting treatment.

Our lawyers are thoroughly prepared to guide you through the process of investigating what happened before, during, and after your sinus surgery. If you have a claim for damages, we can assist with positioning you for the best possible outcome in a sinus surgery malpractice lawsuit. Simply call 973-435-4551 or send us a message today for a free consultation.