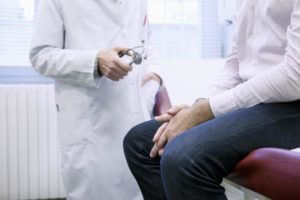 In this case, the victim underwent a vasectomy, which is a medical procedure used as a permanent form of birth control. A vasectomy typically takes between 20 and 30 minutes and can be performed by a urologist, a general practitioner, or a general surgeon. During the procedure, the vas deferens from each testicle is cut, clamped, or sealed to prevent the penis from releasing sperm when a man ejaculates. The intention of a vasectomy is to prevent an egg from being fertilized during intercourse by permanently removing sperm in the semen. In other words, ejaculation remains the same, but the semen is without the necessary sperm for fertilization. Many married couples use vasectomy as a method of birth control after having children, as it is 99.85% effective at preventing unplanned pregnancy.

The risk of complications associated with vasectomy is extremely low. While you may have some minimal discomfort and swelling, it generally resolves within a few days and you can resume your regular activities. For our client, he presented with symptoms unrelated to the vasectomy, and yet his urologist failed to order tests, examine, diagnose, or treat these symptoms. He was ultimately diagnosed with prostate cancer.

The symptoms of prostate cancer can vary from patient to patient, but some of the most common symptoms include:

What Happens when Prostate Cancer is Undiagnosed

Our client underwent a routine vasectomy in in November of 2013. In January of 2014, he began experiencing symptoms unrelated to the procedure, including low volume ejaculation, decreased libido, and loss of sensation. His doctor indicated that this was not a result of the vasectomy. The symptoms persisted and he returned to the urologist in May, at which time a PSA test revealed that his PSA was out of range. However, the physician did not order a biopsy or any additional testing. After a year of worsening symptoms, the patient was seen by another doctor, who ordered an MRI and determined that he may have prostate cancer. The man was subsequently referred to an oncologist for a biopsy, which revealed that cancer had developed in 90 to 100 percent of every quadrant of the prostate. His symptoms were caused by a mass that was impinging on the seminal vessel. Doctors performed surgery to remove his prostate in July 2015, but the cancer had already spread to one lymph node and his bladder. Our client is currently undergoing aggressive treatment to combat a cancer that was allowed to proliferate for far too long.

This case is a tragic example of medical negligence, which allowed prostate cancer to progress and become more life-threatening, causing catastrophic harm to an innocent man and his family. When this devastating scenario occurs, victims have the right to pursue justice. At Fronzuto Law Group, our medical malpractice lawyers advocate for victims across New Jersey who have suffered injuries as a result of cancer misdiagnosis and failure to diagnose cancer. In fact, with a practice concentrated on medical malpractice, we have the knowledge and resources to tackle the most complex cases involving breast cancer, lung cancer, brain cancer, colon cancer, and many others. If you or someone you love has been the victim of medical malpractice involving cancer diagnosis, contact our North Jersey offices today at 973.435.4551 to discuss your specific case and learn more about your legal options.