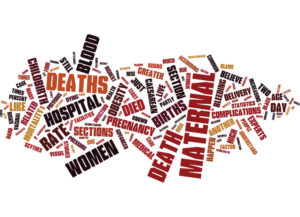 While many expectant mothers enter the hospital for the birth of a child, leaving soon after without issue and bringing healthy babies home, others are not so lucky. In fact, maternal complications threaten to leave women permanently marred by the birthing experience, physically and emotionally. Some enter the hospital only to find themselves admitted for days or even weeks thereafter, as their ailing or injured bodies attempt to repair and recover. In the most devastating scenarios, shell-shocked and grief-stricken loved ones must leave the hospital without the mother of their child, their newborns permanently deprived of even the chance to experience a mother’s love.

Some of these cases cannot be helped or prevented, owing to circumstances outside of anyone’s control. Others are directly linked with medical negligence that cannot and should not be tolerated. Where is the justice for families? Often, the legal process provides restitution and just compensation for victims and their families after maternal complications. Our New Jersey medical malpractice attorneys frequently represent mothers who have suffered maternal complications in hospitals and medical facilities. We also serve as passionate legal advocates for those who have lost loved ones before, during, or soon after delivery, seeking damages through wrongful deaths lawsuits across the state.

If you would like to discuss a potential claim involving maternal complications in New Jersey or elsewhere in the tristate area, please feel free to contact us at 973-435-4551 for a free consultation. You can also provide a brief description of your case in our convenient form below.

How Common are Maternal Complications in New Jersey Hospitals?

The New Jersey Department of Health recently released its report on maternal complications and hospitalization, entitled “Overview of Statewide Rates of Complications Associated with Delivery Hospitalization,” revealing some confounding results.

The report rates occurrences in each of four surveyed categories: maternal birth lacerations, maternal illnesses or disease with transfusions, infections arising after hospital admission, and hemorrhaging after birth. It shows the total number of women in the hospital with complications per 1,000 hospitalizations statewide based on specific criteria, and then further delineates the occurrences among various races and ethnicities.

Other birth complications investigated are those that lead to severe or short-term maternal disease or illness, such as heart and breathing problems, organ failure, eclampsia, infection, sickle cell anemia, blood transfusion, and anesthesia complications. The rate of these complications, referred to as maternal morbidity with transfusions per 1,000 hospitalizations, were greatest for non-Hispanic black mothers, second for Hispanic mothers, third for other multiracial mothers, and least for Asian mothers.

Of note, the greater numbers were associated with cesarean births over vaginal births. In fact, a nearly 11-point differential exists between the highest and second highest delivery methods. All racial and ethnic groups for this category were below the state average for cesarean births, but far above the state average for vaginal births. Specifically, the rates of maternal morbidity with transfusions per 1,000 hospitalizations were as follows:

The third division of reported complications involved the rate of infection after being admitted to the hospital for the birth of a child. The infections tracked involved the urinary tract, reproductive tract, and surgical site infections, which occur after delivery within the first 10 days. Per 1,000, the rate of infection was 6.5 for all hospitalizations, 10.6 for surgical/cesarean births, and 4.2 for vaginal births.

The rate of these complications also varied among ethnic and racial populations and followed the same pattern as morbidity with transfusion rates from highest to lowest: Non-Hispanic Black, Multiracial, Hispanic, and Asian, with the greatest disparity, a nearly 4-point differential, between the highest and second highest population. Again, the rates were higher for cesarean births than vaginal. Post-admission infections were higher than the state average for cesarean births in the non-Hispanic black population, and all but non-Hispanic white women were above the state average in this category for vaginal births.

The fourth and final type of maternal complication amid hospitalization measured in the report is post-delivery hemorrhaging, which is considered blood loss of over 500 ml for vaginal births and 1,000 ml for cesarean, or, for the purposes of the report 1,000 ml blood loss and hypovolemia signs within one day of giving birth. Hypovolemia is the decreased intravascular volume due to blood loss, which can lead to shock. Postpartum hemorrhage was high across the board, with slight decreases in numbers between populations. In particular, the rates of post-delivery hemorrhaging were:

What Delivery Complications can Mean for Mothers

Overall, the report demonstrates that unexpected complications during or after delivery occur more frequently among some populations when compared with others. Ultimately, life-threatening birth complications, the severity of which varies among individuals, affect women of color most, with non-Hispanic black women suffering disproportionately more than others. A combination of factors may contribute to these outcomes, but New Jersey doctors should be on high alert for complications affecting all women as they provide prenatal and delivery care.

With the reported incidence of higher life-threatening or long-lasting damage risks among minority populations and high risk pregnant women more generally, primary care physicians and specialists must be even more vigilant with these patients, ensuring family history is carefully reviewed and communicated to staff and referring physicians, so that obstetricians and other doctors are prepared for, and competently responsive to, potential emergencies. Regardless of the specific circumstances, physicians who are uneducated, unprepared, or inattentive may fail to respond to potential complications before, during, and after labor and delivery. These negligent doctors may harm their patients, even contributing to their deaths.

If your delivery left you with unnecessary pain and injury from your physician’s mishandling of your child’s birth, or a loved one suffered harm or death due to medical negligence with the birthing process, call a knowledgeable medical malpractice lawyer at Fronzuto Law Group to review your case. You have rights to compensation for a medical professional’s or hospital’s substandard care when these acts or omissions cause direct harm. Our attorneys have decades of experience practicing in this area of law in New Jersey, and we are here to provide the answers and advocacy you are searching for. Please do not hesitate to contact us if you would like a free consultation.