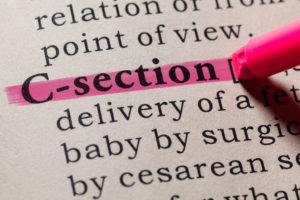 Doctors are Performing Too Many Cesarean Deliveries in Hospitals, Now What?

In recent years, the number of women giving birth by cesarean section has increased, while the life-saving benefits for mother and baby have not. The data suggests that overuse of the c-section delivery method is due, in part, to outdated beliefs and habits. For example, when doctors learn that a woman is carrying twins or higher multiples, they may immediately assume that a cesarean section is likely. Similarly, when a late-term baby is larger than normal or the mother’s pelvis is small, the assumption is that the baby will need to be surgically removed rather than vaginally delivered. No doubt, there are cases in which c-sections are necessary. Failing to order a necessary c-section in an emergency labor situation, for instance, if the placenta detaches from the uterus, can be equally dangerous, as are other critical c-section errors. However, recent clinical guidelines in obstetric care suggest that physicians should adapt a new mindset considering advancements in technology, methods, and attitudes about historical leanings toward the c-section birth.

C-section Rates have Spiked without Improvements in Outcomes

Ten years ago, one out of three women delivered by cesarean section. Although the World Health Organization recommends aiming at a 10 to 15% rate of c-sections among all births, most U.S. hospital rates range from approximately 30% to an astounding 60% of deliveries. Despite the massive range, the outcomes for mother and baby do not differ from institution to institution. In other words, the increase in cesarean births in some hospitals does not equate to an overall improvement in outcomes for pregnant and birthing women and their children. In fact, recent data suggests that for women without pregnancy and birth complications, cesarean births may be riskier than vaginal births.

One Canadian Medical Association Journal-featured study found that women undergoing cesarean sections more often experienced life-endangering conditions than those delivering vaginally, particularly if they were over 35. Women hemorrhaged more and experienced ruptured uterus, along with shock, heart attack, infection, kidney failure, and more. Additionally, women suffered more long-term effects that affected subsequent pregnancies, such as placenta abnormalities, including placenta previa (the placenta prevents the baby’s exit from the womb). In certain cases, more dangerous than the cesarean section to women and babies are the long-lasting effects for future pregnancies.

The ACOG guidelines to obstetricians and gynecologists is based on studies that found that differing cesarean practices and patient preferences nationwide account for some of the cesarean increases over the last decades. Each hospital has its own policies and practices regarding when to perform cesarean birth. To promote the effort to reduce c-sections across the country, the Joint Commission and the Department of Health and Human Services plan to publish the c-section rates of hospitals throughout the United States.

The primary reasons for c-sections are fetal distress, abnormally large babies (fetal macrosomia), dystocia (failure to progress or arrested labor due to various causes), multiples, and the baby’s abnormal position at birth. Depending on the specific circumstances, these issues may be addressed by allowing labor to proceed with added assistance. For example, when labor slows, providing doulas (birth assistants) to aid the mother in labor may facilitate a vaginal birth. Likewise, manipulating a breech baby to head-down position and allowing a mother with multiple babies to labor while being diligently monitored, may help to avoid cesarean births. When evaluating what medical and alternative intervention is necessary and when, this takes time, expertise, and patience, which may or may not be top of mind concerns for hurried doctors and nurses.

How far along is Allowed for Labor to Progress?

Reassessing normal labor progression can also adjust criteria for the c-section decision. On the scale of slow to arrested labor, physicians should rely on revised numbers of cervical dilation to define the start of active stage labor. The medical findings and related guidance suggest that active labor begins when the cervix is dilated at 6 centimeters. This allows more time for labor when assessing the total time a woman should endure contractions and at what point to end natural labor.

When labor fails to progress, the protocol is to administer a medication called oxytocin to increase contractions and activate a stalled or slow labor. The threshold of how long to keep oxytocin ongoing has been two hours. However, extending the two-hour induction period for those reaching 3 centimeters’ cervical dilation or more, to four hours, showed improved outcomes of vaginal over cesarean delivery. When labor is considered in active phase at 1 to 4 centimeters cervical dilation for two hours, a woman’s labor is deemed arrested and headed for a cesarean delivery. However, if her active phase labor is gauged beginning at 6 centimeters or greater, the criteria for arrested labor and resulting cesarean section changes.

Then, cesarean delivery is only considered after a woman in the active phase of labor has endured four hours of uterine contractions or six hours with oxytocin without progressing. Similarly, the study recommends that inducing labor (which often leads to cesareans) before 41 weeks’ gestation, using cervix ripening (softening) agents before inducing, and measuring active labor when the membranes break and oxytocin is given, will allow a woman extra time to achieve vaginal delivery.

In second stage labor, which is defined as full dilation (the cervix is fully open) and pushing the baby out, complications that lead to cesarean birth include the baby’s abnormal position or size, epidurals that interfere with effective pushing, and maternal weight. Like first stage labor, a certain cut off time should not be the measure for when surgical birth occurs. Although three hour or greater pushing stages statistically are associated with higher risks of injury or death to both mother and baby, those statistics are not related to how long the mother pushes so much as other factors. As such, the study concludes that if fetal monitoring shows the baby is well and the mother is also, second stage labor should continue until it seems obvious that a vaginal birth will not occur. Two hours or more is considered acceptable for first-time pregnancies and three hours or more for women with prior pregnancies, provided that pushing leads to progress. One hour should be added to the total time when epidurals are used.

The study further suggests that instrument-assisted vaginal delivery with forceps or vacuum extractor tools does not lead to greater risks than that of cesarean section for bleeding, anesthetic reactions, and other complications associated with surgery. Therefore, these methods should be evaluated as an alternative to surgery. However, doctors must be trained to use the instruments with expertise and confidence to lower the c-section rates, while protecting the fragile anatomy of the infant and the woman delivering. Another cesarean reduction method mentioned is manual rotation with technological assistance (ultrasonography to ascertain the position), to reposition a baby who is not facing the mother’s back and head downward position into the birth canal.

The new guidelines further discuss the value of fetal heart rate monitoring adjustments. One danger to the fetus warranting c-section delivery is abnormal fetal heart rate. If the fetus has either no heart rate, variability, or slowed heart rate, these are warning signs indicating fetal distress. The cause may be oxygen-deprivation, which could lead to irreversible brain damage, cerebral palsy, and other serious birth injuries. Before rushing to surgery, however, the ACOG guidelines recommend emergency steps to resuscitate the fetus by repositioning the mother, administering oxygen, alleviating the mother’s hypertension, and checking for umbilical cord obstruction or other reasons for fetal distress. Of course, if these are to no avail, a timely decision must be made, and the baby must be delivered urgently.

Since fast or slow fetal heart rate may be cause for concern, the fetus should be monitored, and the cause explored before rushing to surgical intervention by way of c-section. Before resorting to surgery, fetal scalp stimulation and injecting saline into the amniotic fluid can also help a fetal heart rate acceleration to decline. Overall, reasons for fetal heart rate changes are complex, requiring physicians to explore other solutions and remedies before defaulting to cesarean. Nevertheless, fetal distress should always be recognized and addressed on an urgent basis, as allowing a fetal to remain in distress for mere minutes can lead to permanent complications from birth.

Stalled labor and fetal distress are the two most common reasons for cesarean births, but only two among many contributors to cesarean delivery. The study emphasizes that each pregnancy must be examined individually and not uniformly reacted to with c-section surgery. Along with manually turning a breech baby, allowing multiple pregnancies to undergo a trial labor, redefining active labor, and eliminating preconceived notions about probable cesarean sections, doctors should help women maintain a healthy pregnancy weight, as too much weight frequently leads to cesarean section. In addition, women with Herpes Simplex II who show no outward symptoms should be prepared for labor with antiviral medication and allowed to deliver vaginally if no clinical indications for complications are present.

Overall, changing the habits and culture in which many obstetricians practice works to reduce cesarean births. The evidence shows that obstetrical providers must become better educated and skilled in the alternatives to cesarean section birth. Otherwise, they may expose their patients to unnecessary risks without the benefit of improved outcomes. In essence, the cesarean should be viewed as a vital birth tool, not an inevitability.

When Doctors Choose the Wrong Birthing Method in New Jersey

By choosing the wrong birth method for their patient, doctors expose women and soon-to-be newborns to a host of serious risks. For instance, a woman may suffer excessive bleeding or other birth complications due to a previous, avoidable cesarean section. This may be considered medical malpractice, especially if the decision for cesarean birth is based on outdated notions about older women, large babies, and other reasons for this type of delivery.

If you or your baby were injured as a result of an unnecessary cesarean section, contact the talented birth malpractice attorneys at Fronzuto Law Group for immediate assistance. Our team is available to provide you with an absolutely free initial consultation. Allow us to evaluate your case for a possible lawsuit and if so warranted, pursue legal action and top compensation. We have extensive background in medical malpractice law in New Jersey, which we are pleased to offer to all victims of birth injuries across the state. Contact Fronzuto Law Group to speak with a well-versed New Jersey birth malpractice lawyer who can provide the assistance you need. Call 973-435-4551 or reach out online for a free consultation.