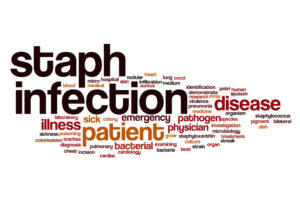 Medical malpractice occurs when a medical professional or facility fails to uphold an acceptable standard of care, ultimately causing injury to the patient. The specific type of injury can fall within a vast continuum, ranging from harm due to an entirely new condition or further complications from a condition that was allowed to progress. In cases involving staph infections, medical negligence can play a role when the infection was acquired in the hospital, developed due to postoperative neglect, was the subject of misdiagnosis, or was not diagnosed and treated in a timely manner. When you suspect that negligence played in role in your staph infection case, an experienced medical malpractice attorney can thoroughly examine the circumstances to uncover what went wrong and whether you may have a justifiable legal claim for compensation. Contact Fronzuto Law Group at 973-435-4551 for a free case review from a distinguished team of medical malpractice lawyers in New Jersey today.

What is Staph Infection?

Staph infections are caused by staphylococcus bacteria, which are everywhere, on the skin, in the nose, on healthy and sick people. Typically, these germs do not cause medical problems. Sometimes, however, they can turn into infections, which can be fatal if the bacteria burrow into the body and into the blood stream, joints, or major organs. Staph infections have the potential to result in a variety of serious infectious diseases for those afflicted, by way of the infection itself, or via toxins generated by the bacteria. Over 30 different staphylococci exist; however, the majority of human infections result from staphylococcus aureus, when an opening in the skin allows the bacteria to enter the body.

Staph is contagious if directly contacted while the infection is active. Moreover, many people are carriers of staph without showing symptoms. An infection may develop from dormant staph bacteria in the body or when contracted from other people or objects, such as pillowcases or towels. Staph bacteria also spread through cuts, scrapes, shared razors, remotes, and equipment in contact sports, where skin to skin contact occurs. Food handlers can transfer staph from skin to food without anyone knowing that staph exists in the food. Because staph bacteria are extremely strong, they survive heat, stomach acids, and salt. Equally dangerous, these infections are often hard to treat and more than one round of antibiotics may be required to resolve them.

Staph infections can appear in connection with a wide range of conditions, from minor skin irritations to life threatening infections, so symptoms vary. Staph infections of the skin include:

In addition, the same bacteria that invades the skin can invade the stomach through food. In fact, one of the primary causes of food poisoning is staph bacteria. Shortly after eating food tainted with staphylococcus germs, symptoms like nausea, vomiting, dehydration, low blood pressure and diarrhea may appear and then pass through. If staph bacteria enter the blood stream, septicemia may occur, making internal organs, bones, muscles, and implanted devices like pacemakers, productive sites for infections. Septicemia symptoms may leave the victim with fever and low blood pressure.

Other types of invasive infections due to staph infection are toxic syndrome and septic arthritis. Toxic syndrome is an extremely dangerous condition often caused by tampons, developed after surgery, or through skin wounds. Toxic syndrome appears suddenly, with symptoms such as spiked fever, sunburn-like rash, muscle aches, diarrhea, nausea, vomiting, confusion and abdominal pain. Another derivative infection, septic arthritis, may occur in the knees, fingers, toes, and shoulders, and is characterized by joint swelling, fever, and joint pain. It is also caused by a staph infection. Finally, breastfeeding women may develop inflamed breasts from mastitis caused by staph, which taints the mother’s milk with bacteria.

Super bugs like MRSA or Methicillin-resistant staphylococcus aureus, represent yet another type of staph infection. Among all of the various types of staph infection, MRSA is extremely difficult to treat, as it is typically resistant to most antibiotics. Symptoms of MRSA include boils, redness, pain, tenderness and pus. MRSA was first discovered in hospitals and healthcare facilities that treat vulnerable populations like the elderly, sick, and those with bed sores or catheters in the body, both of which are open sources for infection. Healthcare associated MRSA (HA-MRSA) has branched out into the community, now known as community associated MRSA (CA-MRSA), which is found among those who recently took antibiotics, who live in crowded conditions, have poor hygiene or skin diseases, and share personal items. Because it is hard to treat, the chances of MRSA spreading into the bones and organs is higher when compared with other strains.

Those susceptible to staph infection risk are those with weakened immune systems and other conditions like diabetes, HIV/AIDS, cancer, skin damage, eczema, vascular disease, lung disease, kidney failure, emphysema and cystic fibrosis. The medications used for these conditions weaken bacteria resistance to staph. Other vulnerable populations include newborns, breastfeeding women, and users of injected drugs, , intravenous catheter, or immune-suppressing medications. Particularly dangerous, hospital patients are often exposed to staph bacteria when they are most vulnerable to infection due to weakened immune systems, burns, or surgical wounds. For instance, it is possible to become infected by staph bacteria that travels along hospital equipment tubing, such as breathing and feeding tubes. When a vulnerable hospital patient develops staph, the situation can quickly turn deadly.

When it comes to staph infections, preventative practices are the best medicine since there is no vaccine for staph infection. Some of the most important mechanisms for preventing staph include: washing hands vigorously for a minimum of 20 seconds and drying them with a clean towel or disposable towel before handling wounds; using hand sanitizer; keeping scrapes and cuts covered until healed; changing tampons frequently; not sharing personal items; washing clothing, sheets and pillows in hot water and bleaching if possible; washing hands before touching food; and keeping hot food hot or cold food cold.

How Staph Infection is Diagnosed

Diagnosis of a mild staph infection is usually made by visual inspection of the skin. However, more severe staph infections may require blood tests, cultured body fluids or tissues, stool sample, skin scraping, throat or nasal swabs, or imaging tests, which are sent to the lab for diagnosis and antibiotic recommendation. A patient might first see their primary care doctor or pediatrician for an infection, unless they seek treatment at an emergency room or urgent care center. Sometimes, a dermatologist is the treating doctor in a staph infection case. For infections affecting the blood or organs, specialists in infectious disease, cardiology, critical care, pulmonology or surgery may be called in to treat the patient. Some complications from staph infection, like scalded skin syndrome, require not only treatment with intravenous antibiotics, but skin protection against dehydration, as skin peels off in large quantities.

Treating staph infections with antibiotics, whether topical, oral or intravenous, and drainage if necessary, resolves most mild infections. However, some staph infections require more than antibiotics. Left untreated, sepsis caused by Staphylococcus Aureus kills over 80% of its victims. For mild infections, healthcare providers may prescribe over the counter antibiotic ointment and potentially, oral antibiotics. Further, abscesses may be surgically drained. More serious infections often require antibiotics administered intravenously in the hospital. The antibiotic prescribed depends on the type and seriousness of the infection, with one or a combination of antibiotics being used. In the most serious cases, the staph strain is antibiotic resistant, as is the case with MRSA bacteria.

When staph bacteria spreads throughout the body and into the organs, other more serious diseases may develop, like staphylococcal pneumonia, which strikes those with lung disease. A patient may also develop a heart valve infection or endocarditis, possibly leading to heart failure; osteomyelitis, which is inflammation of the bones; septic arthritis of the joints; or thrombophlebitis, a vein infection derived from venous catheters in the hospital. Complications of staph contamination include bacteremia, a blood infection, potentially leading to sepsis and septic shock, which causes blood pressure to dip extremely low and can be fatal. Untreated staph infections can also lead to pneumonia, which can lead to  high fever, chest pain, persistent cough, chills, or trouble breathing.

Delay in diagnosis and treatment, the two main allegations for most medical malpractice actions, can be fatal for staph infections. Equally so, staph infection may be a postoperative complication due to medical negligence during or after surgery. Hospital negligence and failure to maintain sanitary conditions in hospitals may also lead to staph infection for unsuspecting patients being treated for other conditions and diseases. Regardless of the cause, complications from untreated staph infection can leave permanent damage. With this in mind, doctors, hospitals, and healthcare workers must competently perform their duties in diagnosing staph infections and take the necessary precautions to prevent staph bacteria contamination for their patients. Failure to do so may cause direct and catastrophic harm. It may also constitute medical malpractice.

If your staph infection was the result of negligence, or a medical provider was negligent in the diagnosis or treatment of staph and you were injured as a result, you may recover damages in New Jersey. In fact, damages for malpractice involving staph infection can compensate you for medical bills, pain and suffering, lost earnings while receiving necessary care, and lost earning capacity. It is important to discuss your case with a knowledgeable New Jersey medical practice lawyer as soon as possible if you are interested in seeking damages for staph infection negligence, as the statute of limitations typically begins from the moment you suffer harm or become aware that such harm has occurred. The skilled NJ medical malpractice lawyers at Fronzuto Law Group can help you understand the legal process, investigate your case for potential instances of medical negligence, and vigorously pursue compensation on your behalf if your staph infection was misdiagnosed, undiagnosed, or left untreated. Call 973-435-4551 or contact us online now for a free consultation.