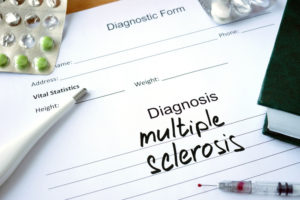 As counterintuitive as it may seem, your central nervous system (CNS), composed of the brain, spinal cord, and optic nerves, can be attacked by your own body. This can, and often does, occur when the immune system behaves abnormally due to certain health conditions, such as multiple sclerosis (MS). The typical response of the immune system to bacteria, viruses, and disease entering the body is to aggressively confront the intruders in an effort to fight them off. However, in MS sufferers, the immune system, in its attack mode, causes inflammation that damages cells and nerve fibers. This sequence of events ultimately leaves scars in multiple areas within the central nervous system, further disrupting the neurological messages between the brain and various parts of the body. It is such disruptions and progressive damage that can lead to debilitating symptoms among those with MS. Fortunately, many of the symptoms of multiple sclerosis can be controlled; that is, if the condition is diagnosed early and treatment is initiated to slow the progress of the disease and address particular symptoms.

Despite the variability among cases, qualified medical professionals are responsible for being informed about the various MS recurrences and symptoms, referring patients with symptoms beyond the scope of their qualifications to specialists, and carrying out the instructions of other more senior members of the healthcare team with whom they are in communication about your care. If your original doctor did not refer you to a specialist, a physician misdiagnosed your condition, or multiple sclerosis was allowed to progress undiagnosed, you may have justification for a medical malpractice claim. Immune-affective diseases can cause irreversible, lifelong damage, including physical, emotional, and psychological pain that you should not be forced to suffer unnecessarily due to a delayed diagnosis or failure to treat in a timely manner. In an effort to rectify such harm, the law provides a clear path through which medical negligence victims and those who love them may pursue accountability and just compensation.

If you suffered harm as a result of improperly or insufficiently diagnosed or treated multiple sclerosis in New Jersey, the skilled medical malpractice lawyers at Fronzuto Law Group can assist with assessing the viability of your legal claim. If negligence caused your MS-related injuries, compensation may be obtained by successfully determining and establishing liability. Our attorneys have extensive experience with this process, as we work everyday on behalf of medical malpractice victims in counties throughout the state. Contact our office at (973)-435-4551 to discuss your MS malpractice case and receive a complimentary consultation.

The immune system is made up of cells that fight off infections, namely, the white blood cells, B cells, and T cells. While MS is thought to be an autoimmune disease, it does not act characteristically like one. Specifically, MS does not produce antigens or proteins that elevate the immune system. Other autoimmune diseases, such as rheumatoid arthritis, lupus, Type 1 diabetes, and psoriasis, have these antigens. In MS, the protective CNS nerve fiber coatings are damaged by the immune system when T cells traveling into the CNS through the bloodstream release inflammation-causing chemicals that damage the nerve fibers, myelin and myelin producing cells. T cells then trigger B cells to join the attack on the CNS by producing damaging antibodies. And T regulatory cells that ordinarily reduce inflammation do not perform their required function, allowing the killer T cells to take over and damage the entire body.

While the causes of MS are generally unknown, possibly attributable to genetic, environmental, or immune system defects, there are various treatments to control certain types of MS and ultimately to prevent the condition from creating too much damage. Many MS therapies target T cells, deactivating them to reduce inflammation.

The nervous system’s neurons are responsible for sensory input, thought, speech, feelings, movement, and elimination. These nerve cells are partially wrapped in a protein and fat-rich sheath called myelin that protects the cell and speeds up nerve messaging. When myelin is destroyed by MS, messages from the brain may:

These MS symptoms manifest among women more than men, since the condition most often strikes women between the ages of 20 and 40. Symptoms can be mild or severe and incapacitating, leaving a person afflicted unable to write, speak, or walk. When considering the devastation caused by many MS symptoms, it is clear to see why diagnosis and treatment to slow the disease is crucial.

Diagnosis of multiple sclerosis can be extremely problematic and challenging for doctors, particularly due to the diversity of symptoms and the similarities to other autoimmune diseases, such as rheumatoid arthritis. Nevertheless, there are clear pathways to diagnosis through appropriate testing, which aids physicians who recognize signs of MS and rule out other conditions from the diagnosis. To detect MS, a patient having vision problems, fatigue, or dizziness, may see their doctor. When determining the underlying cause of the person’s reported symptoms, physicians may review their medical history, physically examine them, and administer neurological tests. They may also order blood tests, a spinal tap, and an MRI to search for scars or lesions over the brain and spinal cord.

The diagnosis of multiple sclerosis is based on damaged myelin, along with the particular symptoms, and the process of ruling out other conditions. A medical professional, particularly a neurologist to whom you may be referred for neurological symptoms, should be able to promptly diagnose MS. A neurologist specializes in diseases of the nervous system like multiple sclerosis and thus, is tasked with having the requisite knowledge and skill for diagnosing and treating MS and conditions like it.

Treatments and Therapies for Multiple Sclerosis

MS treatment is largely focused on symptom control, physical therapy, and preventing the disease from escalating. For instance, physical therapy can help an MS patient with walking, balance, and strength, while occupational therapy aids with daily living activities. Medications for pain, incontinence, depression, muscle spasms, erectile dysfunction, and urinary problems are likewise available. However, some treatments may have side effects, which should be discussed by your doctor when explaining all of the therapeutic options at your disposal. Additionally, certain steroids work to relieve symptoms in the short-term, while Interferons and drugs that block myelin-damaging cells are also prescribed in some cases.

Multiple Sclerosis Malpractice Lawyers for those Injured in New Jersey

Whether your healthcare team failed to diagnose in a timely manner or misdiagnosed your multiple sclerosis, which delayed treatment and caused your condition to permanently damage your vision, memory, mobility, or brain functioning, it may constitute medical negligence. Similarly, if a treating physician selected or administered the wrong medication or otherwise prescribed the wrong type of therapeutic intervention for your specific form of MS, you may have cause for legal action. These are just a few of the many ways in which MS can be mishandled, an all too frequent occurrence in the healthcare field. At Fronzuto Law Group, our firm concentrates on medical malpractice litigation in New Jersey, due to the challenging nature of this area of law and our continued efforts to provide superior representation. Call (973)-435-4551 to discuss your case with an attorney and find out more about your available avenues toward justice.